Beirut, Lebanon, July 08, 2013: Lebanese agency Eastline Marketing won the Endeavor Advocate Award at the Omdiyar Network – Endeavor Awards Dinner. The accolade, which rewards successful entrepreneurs that have contributed to the Endeavor cause, was given out to a variety of candidates from numerous emerging countries.

The event was hosted in San Francisco on June 20 by Nick Beim and Wences Casares. It bought together some of the most celebrated Endeavor entrepreneurs. Upon receiving news of the accolade, which was presented by Ernst & Young, Eastline CEO and co-founder Marc Dfouni stated “We want to thank Endeavor for this wonderful honor. They have always supported us and without their help, Eastline would not be the agency it is today”. When asked where he sees Eastline in the near future, co-founder Nemr Nicolas Badine said: “We want to become the main digital marketing agency in the MENA region.”

During the dinner, Endeavor also gave out awards based on social impact, highest revenue and Greatest Growth in Jobs. The latter was given out to entrepreneurs from South Africa, Turkey and Brazil.

Eastline Marketing is a leading digital marketing agency in the Middle East. Founded by Marc Dfouni and Nemr Nicolas Badine in 2006, it was one of the first companies in the MENA region to offer a full range of online marketing services.

Endeavor is a non-profit organization that helps entrepreneurs in emerging countries fulfill their potential via the advising of world-class business leaders. Endeavor has created over 200,000 high-value jobs. 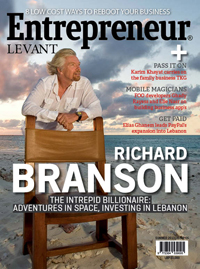 In tough economic times it’s sometimes hard to see the silver lining. But according to Marc Dfouni, CEO of Eastline Marketing (a digital marketing agency) it’s a time for companies to take advantage of the situation — especially when…