You are here: Home1 / violence against women law 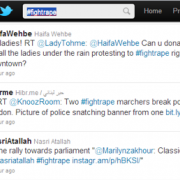 The world is currently witnessing instant news sharing and updates of leading happenings across the globe. Everyone has had an opinion of how social media has changed lives, but today social media is not only doing that and connecting the world, but it has also become the voice of the unheard, a revolution medium and a window to the society’s misfortunes.

Everyone has become suddenly aware of #Tahrir Square protests; everyone has followed closely how some Arab countries claimed their political independence.

Aside from politics, NGOs have also found social media a means to create awareness and channel their good cause. Social media in this case has appealed to the better human and society.

“Please re-tweet, please share” and for a good cause who doesn’t?

The world as we know it has changed bloggers as we know them have changed (at least some).

Locally, feminists in Lebanon are marching for the Adoption of the Violence against Women Law and the removal of article 522 of criminal code.

Regionally, the Arab countries are still fighting to reach some kind of stability after the storm. While also almighty Turkey is having its own share of silent online campaign to free dozens of journalists and twitter’s #FreeJournalists can testify to this.

Our social networks are overwhelmed at the moment with the viral human causes, just login to Twitter and witness how social media is indeed helping change lives.